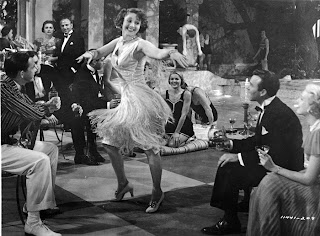 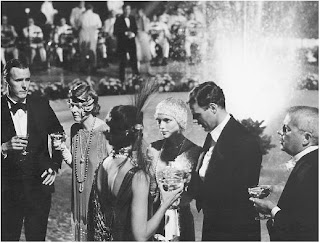 Gatsby throws excessively extravagant parties as evidenced by the number of guests, the lights, the food and the entertainment. For example, the juice from two hundred oranges is extracted every week for his parties. The reason Gatsby throws these huge, flashy parties is all part of his attempt to catch Daisy’s attention; either hoping that she would catch a glimpse of the bright lights across the bay or through word of mouth. However even with the grand scale of his parties, none of his guests seem to know who Gatsby is, some even coming up with ludicrous stories to explain his mystery. Most of these guests are simply there to enjoy the glamour which they believe to be the American Dream. Though when examined closely, corruption is easy to spot. During Nick’s first attendance at Gatsby’s party, he makes this observation. “I looked around. Most of the remaining women were now having fights with men said to be their husbands. … One of the men was talking with curious intensity to a young actress, and his wife, after attempting to laugh at the situation in a dignified and indifferent way, broke down entirely and resorted to flank attacks – at intervals she appeared suddenly at his side like and angry diamond, and hissed: ‘You promised!’ into his ear.”  The husbands are bored and unsatisfied with their marriages while the wives are upset are their husbands’ disregard for them. Furthermore, the guests at his parties only show up as a way to prove their social status and to enjoy what they perceive as the American Dream. No one at the party shows more than a superficial curiosity for Gatsby’s character. This is shown at the end of the novel when no more than a handful of people show up at his funeral where there could have easily been hundreds of people at his parties. This emphasizes the hollowness of the American Dream. 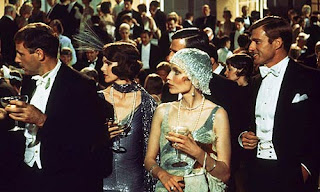 It is ironic that the whole purpose of these parties is to attract Daisy to Gatsby; it’s all to show her the riches that he has amassed and of what he can offer her. However when Daisy finally comes to one of his parties, she is not impressed. She feels out of place at the party because this is not the lifestyle that she is used to. This shows the impossibility of Gatsby ever achieving his dream because Daisy would never leave Tom for Gatsby because she is so used to the lifestyle that she and Tom share.

The first party seen in the novel is the get-together at Tom’s house. When compared to Gatsby’s over-the-top parties, Tom’s party has an understated simplicity to it. This contrasts the new money and the old money of the novel; where the new money feel the need to constantly flaunt their money in an unnecessary way, the established rich are comfortable and graceful in their wealth. This party is thrown out of boredom as it is something for them to do in their mundane lifestyle. Before the party, Tom and Daisy are seen as the ideal couple living the American Dream. They have the money, the beautiful house, a family. However, during the party this illusion is shattered. Tom is excused from dinner to receive a call when it is revealed that the caller is his mistress. Tom is not fulfilled with the American Dream which is why he has an affair. If he was satisfied, he would not feel the need to sleep with someone that is not his wife. This later proves to be the same for Daisy when she is reunited with Gatsby.

Corruption is further shown at Myrtle’s impromptu party in New York. It also contrasts Tom’s party in East Egg. He is tempered and controlled at his party in East Egg. However, a different side of him, a more volatile side of him is show at Myrtle’s party. Daisy refers to him as a ‘hulking, brute of a man’ which Tom clearly does not like. But he does nothing more than object. When he’s with Myrtle and he dislikes the fact that she is referring to Daisy, he lashes out and hits Myrtle. He is a two-sided character and it also shows a distinction between the upper and lower class. Violence would not have been tolerated in the East Egg. But in New York, with Daisy whom comes from the Valley of the Ashes, he is free and able to lash out physically. Also, the action of Tom hitting a woman shows that he is completely corrupt and something that a gentleman would not do.
All these parties are used by characters for a purpose. This one is used by Myrtle to show off Tom. Tom is her shot at achieving the American Dream and she will do anything to get it. In this case, she uses her sexuality which furthers the theme of corruption.