The Valley of Ashes

Valley of Ashes represents absolute poverty and hopelessness.
“This is a valley of ashes – a fantastic farm where ashes grow like wheat into ridges and hills and grotesque gardens; where ashes take the forms of houses and chimneys and rising smoke and, finally, with a transcendent effort, of ash-grey men, who move dimly and already crumbling through the powdery air. Occasionally a line of grey cars crawls along an invisible track, gives out a ghastly creak, and comes to rest, and immediately the ash-grey men swarm up with leaden spades and stir up an impenetrable cloud, which screens their obscure operations from your sight. … The valley of ashes is bounded on one side by a small foul river, and, when the drawbridge is up to let barges through, the passengers on waiting trains can stare at the dismal scene for as long as half an hour.” (Pg. 26)
The lower classes who inhibit this region all want to leave but cannot. This illustrates how the American Dream is impossible to achieve. For example, Myrtle dies trying to escape the Valley of Ashes. Also, when Tom visits, it shows the difference between the rich and poor.
“Hello, Wilson, old man,” said Tom, slapping him jovially on the shoulder. “How’s business?”
“I can’t complain,” answered Wilson unconvincingly. “When are you going to sell me that car?”
“Next week; I’ve got my man working on it now.”
“Works pretty slow, don’t he?”
“No, he doesn’t,” said Tom coldly. “And if you feel that way about it, maybe I’d better sell it somewhere else after all.”
“I don’t mean that,” explained Wilson quickly. (Pg 28) 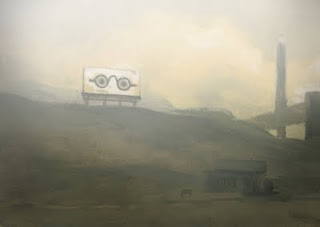 This confrontation of Tom and George shows how the rich look down on the poor because of the difference in their social status. It represents the moral and social decay hidden by the West, and East Egg. The valley is created through industrial dumping and thus a by-product of capitalism. The people and also the environmental are suffering. Tom, Daisy, and Jordan, with their empty, void lives, are the characters represented as the formless bodies of ashes in the valley of ashes. The ashes are symbols of dead, with more self-centered and arrogant people arising from them. Every generation, the ashes pile distorting the American Dream further.